Sandra McQueen-Baker: WRAP Works for Anybody 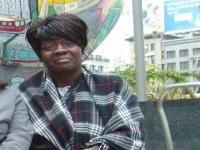 When Sandra McQueen-Baker, CEO of Fresh Start – Miami-Dade, Inc. in Florida, first heard people talking about WRAP, she knew it was an initiative that could happen.  After discussing it with her colleague, Cindy Schwartz, she pitched it to the Department of Children and Families.  Soon after that, Alan McNabb and B.J. North from the Copeland Center came down and did a three day workshop and the WRAP ball started rolling.   The people who took the workshop started getting together in small groups and a consumer network was developed to address issues and concerns in the Miami-Dade County area and how to help people with WRAP.    Soon after that,  Sandra and Cindy became WRAP facilitators.

Sandra really appreciates WRAP for herself and her family for many reasons.  It is a structured approach she can identify with and have something her family can talk about together.   She needed the “rope” of WRAP as a lifeline and she wants to give that lifeline to the world.

So far there are almost 75 WRAP facilitators in Sandra’s area, with close to 1,000 people who have taken WRAP workshops.   Things are now underway to get WRAP in other places out of her area.

Sandra strongly believes that WRAP works for anybody.  When she is trying to explain this to people who do not have a mental health challenge, she tells them to close their eyes for a moment and imagine a time in their lives when there was a substance abuse problem,  a terminal illness in the family, a job loss, or children who were sick.  These are all human issues that are sometimes not evident.   With WRAP you can develop action plans for all those kinds of situations.   WRAP is important to everyone.  When people who do not have a mental health challenge envision their own difficulties, which may be sporadic, they can better understand what people with mental health challenges go through.

Sandra loves the key concepts [hope, personal responsibility, education, self-advocacy and support], especially “personal responsibility” because it puts the responsibility on her.  She used to give her power away – now she owns her mistakes and rectifies them.  Sandra says, “When I can identify who I am, I can help others find their place in the world”.

Over the years of facilitating WRAP, Sandra has noticed that if you become a supporter, you’ll start developing supporters.  When you open yourself  up to become available to support other people, they are likely to return the favor.

WRAP has opened many doors for Sandra.  She still has some rough times, but she gives herself permission to step away and breathe, look at her WRAP, refresh herself, and find resources.  She believes we all deserve to be happy.

Sandra adds, “WRAP is a mirror into your own soul.  It is simple, yet powerful.  It is a personal glimpse into your own self where you are telling your own truth.  WRAP is like a love letter you write to yourself – it reminds you how special you are”.

Thank you, Sandra Baker-McQueen, for all the people you have touched with your sincere and heartfelt WRAP enthusiasm.