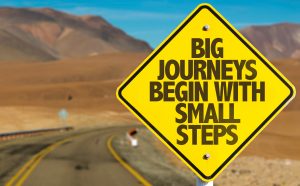 May 1 marks the first anniversary of the time my husband and I sold most of our stuff and moved our family cross-country to a town we’d visited only twice into a house we’d bought after only ever seeing it online because we decided to follow our dreams. It was the biggest, scariest change of my life. Let’s be honest: It could have gone really, really badly.

And parts of it really, really did. The day before we left, just after signing the title paperwork on our new house, our car broke down over an hour away from home. Later that night, less than 12 hours before we were leaving to drive from central Florida to the high Rockies of Colorado, our then-5-year-old twins both came down with strep. We managed to get on the road (hours later than planned), with my husband driving the moving truck (and pulling the broken-down car) and me driving our kids and elderly dog in the minivan. We then promptly lost almost a day in detours because the entire route through the southern states was full of road closures due to flooding. We finally got through the flooded areas only to get stranded in Kansas in a freak blizzard. The night before the blizzard, we were stopped in an area with terrible storms, and the tornado alerts at the hotel went off all night, terrifying all of us. 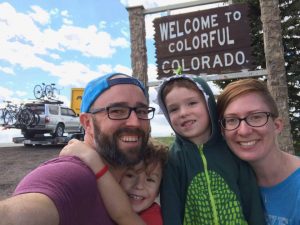 The King family at the Colorado border. We weren’t in the clear yet, but we sure were excited!

Once we finally crossed the Colorado border and the distant mountains were in view, I thought we were home free. Then my 100-lb dog tried to climb out of the car while we were going 70 mph on the highway. To put it mildly, he was car sick, which I got to explain—extremely awkwardly—to the state trooper who stopped to ticket me for stopping/standing along a right of way. Then, when we were finally, FINALLY in the homestretch, the moving truck broke down.

An hour and a half from our house.

And it was snowing.

“When things go wrong” is a huge stressor for me. So are “driving long distances,” “when the kids won’t stop crying,” “when I feel like I’m not in control,” and “when I feel like I’m failing.” I was already nervous about the big move and all the variables that went with it. With all these things going wrong on the trip, I kept saying to myself, “THIS WAS A TERRIBLE IDEA. WE ARE RUINING OUR LIVES BY MOVING.” That kind of response is one of my early warning signs. I quickly realized that I needed to get things back on track if my family was going to survive this change with our wellness and our relationships intact.

So, during one of our numerous rest stops, I busted out my WRAP and made a mini-Moving Stressors Action Plan to get me through the rest of the cross-country drive. I started with wellness tools I could use in the car: listening to music I enjoy, listening to podcasts, calling friends to catch up, being mindful of the sights and sounds around me, singing to my children, drinking water, doing yoga stretches when we stopped for meals, filling the gas tank when it reached half full so I wouldn’t worry about running out of gas, eating snacks regularly, checking in with my husband every 100 miles, looking on the bright side of problems.

Just making this list shifted my mindset. I realized I had been neglecting my own needs in the rush and bustle of the trip, and it was affecting how I was reacting to problems and challenges. It was at that moment that I realized all the “horrible” things that had happened so far were actually kind of miraculous: 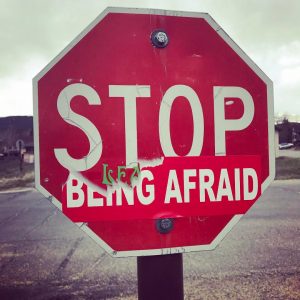 During one of my very first runs after the move, I was wondering whether we had made the right decision. Then I ran by this sign, and I had to take a picture of it. Message received, Universe!

Thanks to my WRAP, by the time the dog got sick, I was able to be grateful in the moment for the trooper who stopped. Not only did he not ticket me, but he stayed with us until we were ready to get back on the road. He talked to my kids, petted my dog, and blocked our car with his for extra safety. I definitely struggled with frustration and strong emotions when the moving truck broke down, but after allowing myself a few minutes to cry, I was able to use my wellness tools to calm down and adjust my expectations for arriving at our new house. I was able to shift my negative thought of “THIS IS A DISASTER” to the positive thought of “THIS IS AN ADVENTURE.”

And what an adventure it’s been. We are now almost a year into our “fresh start” out here in the mountains, and the disastrous trip west has become one of our favorite funny stories. As we’ve adjusted to our new lifestyle, we’ve used the challenges of the change process to help us create a better plan for family wellness. All four of us, including the kids, have learned how to better use our wellness tools and action plans to manage the ups and downs of change. Even though, as I said in the beginning, this move could have gone really, really badly, it’s been really, really wonderful.

Parts of the process of moving were stressful and even painful, but embracing this change has been worth it and then some. I’ve begun to think about the “pain of change” in the same category as muscle soreness after exercise. It might hurt a little, but at the end it makes me stronger—and the more I embrace exercise by doing it, the less soreness I have over time. It’s also the kind of pain that reminds me that I’m alive and that I’m living a life that includes pushing myself out of my comfort zone to grow.

How has WRAP helped you navigate changes in your life? Big or small, we want to hear about it. Visit our Facebook page and share your change story in the comments. We may feature your experience in a future article.